Note: This article was originally published in the July, 2011 Issue of UFO Midwest Magazine (later changed to UnX News Magazine). 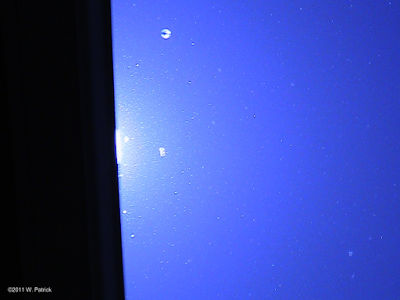 Bill Spicer, an aircraft engineer in Wichita, Kansas, tried to get photos of UFOs for years before discovering this technique, which has proved to be very successful.
Bill has captured film footage and still photos of thousands of UFOs during daylight hours.  He believes these objects are in our skies all the time, but we don’t normally see them due to the glare of the sun and other factors that place the UFOs out of our normal
field of vision.

The UFOs may be in the Ultra-Violet spectrum, which is just outside the range of sight for humans.  W. Patrick found that by using polarized A-B UV spectrum sunglasses, viewing of UFOs is possible.

A pair of A-B UV sunglasses is held close to the front of the camera lens, and the photographer should wear a second pair of the same type of sunglasses while looking through the viewfinder. This is essential—DO NOT LOOK INTO THE SUN while using this technique!

Spicer showed slides and film to the Kansas City MUFON attendees at the May, 2011 meeting in Kansas City. The audience was shocked to see hundreds of UFOs appear on the screen, shooting by very quickly. They made impossible maneuvers at an extremely high rate of speed.  Some of the UFOs have wedge cuts in their sides, which are similar to the UFOs captured by the space shuttle camera during the famous 12-mile long tether flight. That film is available on YouTube.

Acquire several (two) quality pair of sunglasses for you to see through and one to take photos through with a digital camera. Polarized, Dark Tinted (works best), UV A & B protection a must.
· Acquire a digital camera. 8.1 or better megapixels recommended. Set camera for distance (if equipped) and light intensity reception to the highest setting. Move to professional mode (if equipped) to take multiple photos in sequence (one second apart works best).
· Conditions. The weather must be clear. Little Haze and Partly Cloudy. Best time to view is between 12 PM and 3 PM local time.
· Northern Hemisphere. Stand on the Northside of the building or structure in shade.
· Look up at the edge of building or structure at approximately 30-40 degrees above where the sun would be visible. DO NOT LOOK DIRECTLY INTO THE SUN. This is not necessary. Some people have reported the ability to see what appear as white objects moving or flashes high in the sky around the bright area near the sun. Do not be confused by dust or particles low in the atmosphere. Look beyond that. Orbs/Ships appear to be from 1000 ft. to as high as 30,000 ft. altitude.
· Hold the camera up and looking through a second pair of sunglasses (camera viewfinder if equipped) start to take multiple photos in sequence. You may be able to see the Orbs/Ships when looking through viewfinder. If you have video mode try that also. This should work the best beginning with infinity and move to 4x power zoom (optical or digital) or greater. Remember the field of view narrows as the power zoom increases. Orbs/Ships appear to be from 1000 ft. to as high as 30,000 ft. altitude.
· Your results should show Orbs/Ships that are white in appearance with some being just out of focus when seen with 4x power zoom. At 37x power optical zoom you will see greater details of the Orbs/Ships. These Orbs/Ships can move at a remarkable speed and appear and disappear quickly. This is the need to have the professional mode taking multiple sequences still photos or run all in video mode.

Bill has captured photographs of at least 27 different types of UFOs, including round, rectangular, star-shape, saucer-shaped, rods, and more.

Bill Spicer is an aircraft engineering consultant living in Wichita, Kansas. He is the author of Beyond Watching-A Journal of Experiences-Understanding UFO's
______________________________
Margie Kay is a UFO investigator living in Kansas City, Missouri. She is the publisher of Un-X News Magazine and co-author of The Fast Movers: High Speed UFOs.