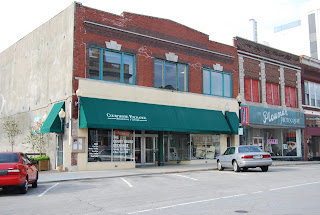 The Quest Paranormal Investigation Team investigated several locations on the Independence Square and found that it is haunted by many spirits who reside here year-round. Many of the brick buildings still in use today were built during the 1850’s.

The Courthouse Exchange at 113 W Lexington is reported to be haunted – possibly by a boy and girl who play tricks on the employees. On numerous occasions, the opening manager has found dimes throughout the restaurant on the floor and tables, and by the register. The dimes are always found face up and are never there the night before. One of the pictures in the ladies’ restroom is sometimes found upside down or sideways or even off of the wall. On one occasion the opening manager, who closed the night before, found a stuffed animal sitting on the bar that she had never seen before. Often the T.V. is tuned to cartoons in the morning. The two young spirits have been sighted by patrons, who think they are live children until they disappear. The manager, Mary Bouer, who has worked at the restaurant for 10 years, says that “I have never personally seen a spirit, but sometimes feel the presence of someone near me and I don’t want to work alone if I can help it.” Bouer said that one time she had two reps from a beer company come look at one of the signs in the window upstairs that was not working, and they came back down the steps very quickly. The two men said that after they unplugged the neon sign from the wall, it lit up again with no electricity, which is impossible. They were so unnerved by the experience that they left and never came back.

The Truman home is reportedly haunted by the ghost of Harry Truman, who sometimes appears in his living room and library, and there have been several reports of a man resembling Harry Truman walking in the neighborhood in the late afternoon at dusk, who dissapears before people’s eyes. It is well known that Harry used to take daily walks around here, especially after his retirement from the presidency. Maybe his spirit is repeating old habits.

Tom Baumgardner, owner of Play Game Café’ reports that there is 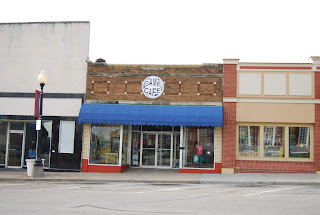 a Two foot diameter hole in the concrete floor in the oldest part of the building basement that is filled to floor level with soft dirt. A local resident familiar with the history of these holes says they are bomb shelters that were put into all the businesses just after the end of World War II when threat of a future nuclear war was rising.

When the bomb shelters were considered unnecessary, the property owners filled them with dirt. Some people say they may be filled with more than just dirt. Some people also claim a number of buildings are still connected by secret tunnels. Like many stores on the square that have a long history of add-ons and modifications, this store is over 100 years old and has been added on to at least three times. In renovating the basement they have discovered old furnace vents, hidden crown molding, bathtubs, and stairs that lead nowhere. The Baumgardner’s also have the spirit of a little 6-year-old boy with blond hair in the building that their young daughter can see and hear. 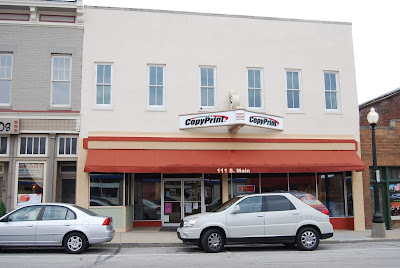 Corporate Copy Print owner Susan Waters says that when she first moved into the building she heard a very loud chain saw but could not locate the source. When she went next door to the neighbors to ask if they knew where the noise was coming from, they said they heard nothing. Several people have heard loud footsteps and running in the vacant second floor of the building. When they go up to investigate, no one is there. A paper delivery man insisted on going up with Susan one day when he heard someone running in the upper level, but he also found no one. 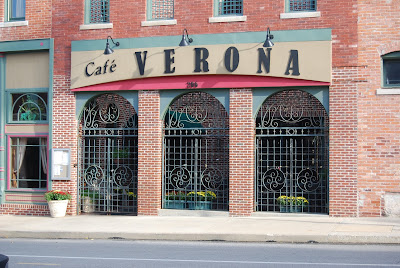 Café Verona reports a lady in blue, who sits at one of the tables in the restaurant, then disappears. She is supposedly behind the knocking over of drinks with liquor in them. The employees say that the cabinets in the kitchen will often open and close by themselves, and a big incident one evening caused the head chef to quit on the spot.

A Salon: (undisclosed name) The owner has seen a shadow move around the salon and felt the presence of someone. I investigated this spot and see a woman in a civil war era dress sits working at a desk in one of the back rooms as she did many years ago. She was the co-owner of the store and did all of the books and ordering of supplies. Now she is content to watch over the owner and her employees.


230 and 228 West Maple where Victoria’s Bridal and Costume and Enchanted Forest are located have a number of resident ghosts who bother the owners and employees on an almost daily basis. This building used to house Montgomery Wards, and before that - the Independence Library. Bess Truman worked at the library and Harry would pick her up ther to have lunch every day during the time before they got married.

The employees at Victoria’s report seeing a “Lady in Red,” who is a young woman in her late 20’s with short dark bobbed hair wearing 1920’s-1930’s style shoes and a red and white skirt and blouse. The lady carries books in her left arm and walks through one wall, through the store displays, and out through the opposite wall, seemingly oblvious to her current surroundings. Other ghosts at the location do interact with the current tennants, often throwing objects across the room, answering questions outloud, whispering, or making things like keys and photos appear and dissapear. The unruly spirits have even set off the alarm with motion only (no door opening) several times causing the owner to have to pay a fine to the police for false alarm fees, which she is not very happy about.
NOTE: during a Haunted Independence class on this site, three ghosts appeared to the attendees. One moved a heavy curtain, one woman in a white lace dress and black patent leather shoes appeared near the door, and the floating head of a creepy looking man with very dark circles around his eyes appeared near a wall. Some of the attendees saw the ghosts, others just felt their presence.

Whatever else is happening on the busy Independence Square, be assured that the resident ghosts are very active, too.
Posted by Margie Kay at 1:21 PM