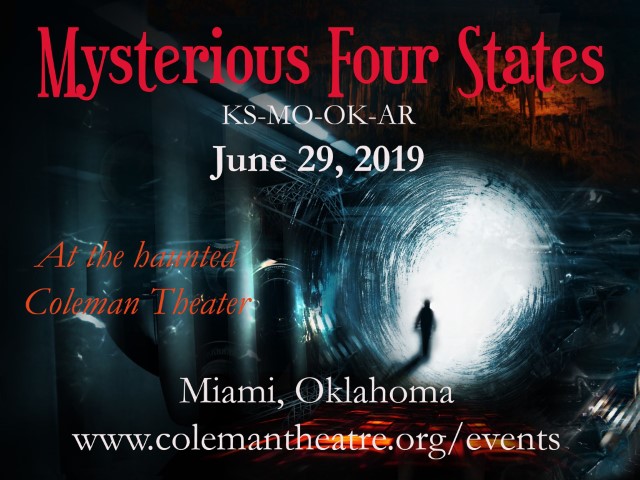 Mysterious Four States is a series of events exploring the noir side of history and legends in the Four State area (Missouri, Oklahoma, Kansas and Arkansas)
Come tour the beautiful Coleman Theater, hear about the mysterious side of the Four State area from the Spook Light to hauntings to infamous mysteries of the Four States.
Admission is $10 per person.
For more information or to purchase tickets, visit the theatre at 103 N. Main St. in downtown Miami, call 918-540-2425 or go online to www.colemantheatre.org/events.
Here is the schedule for the Mysterious Four States at The Coleman Theater. You are welcome to attend any or all sections and participate in discussions, plus the movie with your paid ticket.
12:30pm Welcome
1pm Bonnie and Clyde in the Four States
2pm Legends of lost treasure in the four states from Spanish gold trains to the lost Confederate Gold of the Civil War
3pm UFO Mysteries in the Four States
4pm Supernatural Four States with video presentation
5pm Q and A and dinner break
6pm The Spook Light legends and experiences,
730pm behind the scenes tour of The Coleman
Discussion Panel: Lisa Livingston-Martin, author and researcher, Margie Kay author and researcher, Larry Wood, author and historian, Joshua Heston, folklorist, author and editor of the State of the Ozarks Magazine and more.
Posted by Margie Kay at 11:46 AM No comments: Links to this post


Valerie Hoover was outside in her back yard when she heard a small plane flying overhead.  She looked up and saw a small plane flying from the Southeast to the northwest, but she wasn't prepared to see a bird nearly the same size as the plane.  An extremely large black bird was flying above the plane in a circular pattern. She watched it for five minutes as it flew downward, then up again, then it flew off to the Northeast and out of sight.

She was shocked to see that the bird’s wings were as wide as the plane's. Valerie speculates that it could have been a moth man due to the size. The creature was too far away for her to  see any features, but it did not look like a turkey buzzard, eagle, hawk or any other large bird that she has seen before. “It certainly was much larger than any bird I’ve ever seen, and perhaps it wasn't a bird at all - it may have been a mothman,” said Valerie.


Posted by Margie Kay at 10:04 AM No comments: Links to this post