Strange Howls in Independence, MO may be Sasqatch

Strange howls and calls have been heard by several witnesses in Independence, Missouri, which to date are unexplained. A woman who has had a number of UFO sightings at her home near the Missouri River near 291 Highway and 24 Highway in northeast Independence has heard some strange howls that she and her husband cannot identify. An investigator went to the site and heard the sounds as well. The residents are both veteran farmers and are familiar with the usual coyote howls, but say that this is nothing like that.

"The sounds are more like very loud screams coming from one area, then another one answers from a long way away. It's very spooky to say the least," said the witness.

The investigator said she cannot explain the sounds, either. "I've heard coyotes, wolves, elk, and moose, and this is nothing like any of them. I'm completely stumped."

Both the witness and the investigator listened to Sasquatch recordings on the internet and say that is the closest sound to what they are hearing.

A Sasquatch was sighted not far from this location at a stream in Sugar Creek, located west of 291 Highway in 2012 (see my other blog post about that incident for more information). Perhaps this is the same creature, or one of several. In interviewing several witnesses who have Sasquatch on their property I've found that it appears that they travel in groups or clans.

If you live in the area, keep and ear and eye out for these elusive creatures.
Posted by Margie Kay at 1:47 PM No comments: Links to this post 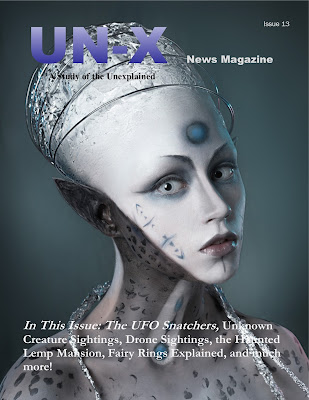 Issue #13 of Un-X News Magazine has several great articles on various paranormal topics including an article by Steve Erdmann called The UFO Snatchers and the Haunted Lemp Mansion by Margie Kay.

Get a free digital issue at www.unxnewsmagazine.com or magcloud.com
Posted by Margie Kay at 1:24 PM No comments: Links to this post