Classified Information About Extraterrestrials Woven Into Plot of New Book

Classified Information About Extraterrestrials Woven Into Plot of New Book

Last week, Obama Advisor John Podesta revealed that his biggest regret since leaving office was “keeping the UFO issue a secret.” On February 17, Vostok, a new novel by NY Times bestselling author Steve Alten, blew the lid off those secrets. 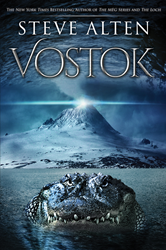 We need to move beyond the human predisposition to view anything which we do not understand or control as intrinsically hostile and threatening.

Washington, DC (PRWEB) February 19, 2015
The author’s source – Steven M. Greer, M.D., the world’s foremost authority on Extraterrestrial Intelligence (ETI) and the same person who provided the extensive briefing to John Podesta on UFOs shortly after President Obama took office in 2009, as seen at http://news.yahoo.com/outgoing-obama-adviser-john-podesta-s-biggest-regret-of-2014--keeping-america-in-the-dark-about-ufos-234149498.html.
Dr. Greer, an emergency room physician who left his medical career to dedicate his life to disclosing the truth about UFOs, also met with James Woolsey, President Clinton’s first CIA director, along with the heads of the Defense Intelligence Agency, the Head of Intelligence Joint Staff, members of the Senate Intelligence Committee, and a select number of Congressmen.
Dr. Greer states: “Millions of people, including military and civilian personnel with top-security clearances have had encounters with UFOs. These ETs are diplomats from other worlds who seek peaceful relations. The ability to reach out and interact with these advanced beings, however, is dependent solely on our consciousness, intentions and attitudes. In the past, the military has cultivated a civilian reaction which leans toward violence and paranoia. We need to move beyond the human predisposition to view anything which we do not understand or control as intrinsically hostile and threatening.”
Steve Alten incorporated over a dozen hours of private interviews with Dr. Greer into the storyline of Vostok(Rebel Press). Vostok is a very real 15 million-year-old subglacial lake located beneath two-and-a-half miles of ice in East Antarctica. Three scientists are selected to venture into this underwater realm in a submersible. What they discover are Mesozoic life forms… and the remnants of an ET Intelligence that reveals how life was seeded on Earth.
As with any Alten thriller, it’s difficult to separate fact from fiction and Dr. Greer’s “forbidden knowledge” is woven seamlessly into the plot, the ramifications of which are often quite disturbing. Vostok exposes a secret transnational Cabal made up of bankers, oil oligarchs, former leaders, and the military industrial complex which has “black-shelved” clean, free energy systems that would literally transform the planet (and the dominant U.S. macro-economy). Alten freely names names, along with the locations of super secret military bases where ARVs (Alien Reproduction Vehicles) are harbored and may one day be used in the ultimate false flag event – detailed in Vostok’s plot as a warning of what could transpire should the handful of sociopaths in charge continue to get their way.
On January 27, Alten experienced his own close encounter, along with Dr. Greer and twenty-four other members of a week-long SiriusDisclosure.com retreat in Vero Beach, Florida. Taught by Dr. Greer, CE-5 (close encounter-5) uses meditation and remote viewing techniques to communicate peaceful intentions to Extraterrestrials. At approximately 9:10 on Tuesday night, an ET ship appeared over the ocean before the group. Minutes later, a second identical ship appeared, each vehicle represented by a brilliant orange light. “It was incredible,” says Alten. “As if two suns had risen at night. Our visitors were letting us know they approved. Moments after they passed back into a higher dimension, two military jets flew in to investigate.”
The close encounter was captured on two powerful night vision cameras and can be viewed on this link:https://vimeo.com/118627585
To watch the Vostok book trailer, click here: https://www.youtube.com/watch?v=tmBKpQBsreo&feature=em-up
Posted by Margie Kay at 9:33 AM