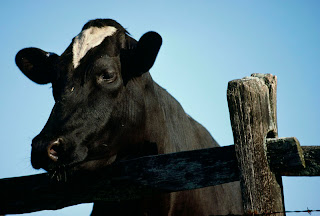 Recent cow mutilations in western Missouri have ranchers concerned about the loss of their livestock. Henry County rancher Lyn Mitchell is baffled by the mutilations of two of her cows in the past nine days.


On July 10, 2013 Lyn Mitchell arrived at her ranch in Northwest Henry County, West of Warrensburg, and found a six-year old healthy Black Angus cow lying dead. The cow's udder, anus, reproductive organs, ear, and tongue had been removed with precision, yet no blood or fluids were found on the ground. Lyn found an article on animal mutilations written by Chuck Zukowski, so she promptly contacted Chuck, who lives in Colorado. Zukowski forwarded the case to Kansas City resident and investigator Margie Kay.

Kay and fellow investigator Larry Jordan visited the site and took soil and grass samples to be examined by a lab in Colorado. They found a strange black outline around where the cow had been lying on the ground that looked like burnt grass.  An unexplained large imprint in a cow pie was found by Jordan.  No samples were taken from the cow, who was badly decomposing and had been moved to a different location.
Mitchell related that a calf was found mutilated with tissue and muscle removed from the jaw, and the tongue removed in December of 2011 in a nearby pasture.


On July 19, Lyn Mitchell called Margie Kay to report that yet another of her cows was found dead. Kay and Jordan arrived just after the sheriff and veterinarian completed their investigations. The veterinarian told Mitchell that the teats had been cut from the udder, the tongue was cut out, and an incision had been made between the front legs with the heart lying outside the body. There was little blood in the chest cavity or heart, which is very unusual. The vet explained that he could not identify the cause of death, but that it definitely was not caused by animals due to the precise cuts on the cow. Kay and Jordan found no blood on the scene, which would normally be found if the cow had been mutilated at that same location. No tracks from vehicles were found, and the only entrance gate to the property was locked.


Lyn Mitchell is distraught over the loss of her cows. She said “I don't understand why someone would want to do this to an animal, or how they accomplished it.” Mitchel said that each cow was worth approximately $2,000, not taking into account the future calves they would have produced. She pointed out that all three mutilated animals were very healthy and the best of her stock.


A similar cow mutilation near Rich Hill, Missouri occurred on April 10, 2013. This involved a cow with missing udder, female organs, and tongue.
A cow mutilation near KCI airport was reported to local media January 5, 2012 and was covered by local news. Kay and another investigator found a 2” indentation in the hard ground where the cow was lying, indicating that the animal may have been dropped from above. Two more cow mutilations occurred n Southwest Missouri in 2011 and 2009. The land owners live on the property and report seeing large craft or balls of light in several locations, which they cannot explain. In all of the above cases, the cows were mutilated in a similar manner, there were precision cuts on the animals, and no blood was found in the area. All of the locations are rural, with limited traffic and accessibility, and gates are always locked.


Other similar incidents have occurred in Missouri, and it is believed that Missouri was one of the first states to report animal mutilations in the 1960's.


Lab testing in past cases has shown changes in the soil, where it has become non-water soluble. This can only occur if extremely high heat is applied to the ground, and so far there is no explanation for this anomaly.


Kay set up a new website where people can report incidents at animuteinv.blogspot.com.


Anyone with information about animal mutilations is invited to contact Margie Kay at Quest Investigation group, margiekay06@yahoo.com or 816-833-1602.
Posted by Margie Kay at 9:21 AM