Citizen Hearing: Is UFO disclosure about to happen? Interview with Steve Bassett

Citizen Hearing: Is UFO disclosure about to happen? Interview with Steve Bassett

An event with historical implications will be held at the National Press Club in Washington, DC from April 29 to May 3, 2013. At that time as many as forty researchers and military/agency witnesses will testify for thirty hours over five days before former members of the United States Congress.
The Citizen Hearing Committee will be Senator Mike Gravel (Dem/Lib, AK), Congresswomen Lynn Woolsey (Dem, CA), Carolyn Kilpatrick, (Dem, MI), Darlene Hooley (Dem, OR); and Congressmen Roscoe Bartlett (Rep, MD) and Merrill Cook (Rep, UT).
The Citizen Hearing on Disclosure of an extraterrestrial presence engaging the human race will attempt to accomplish what the Congress has failed to do for forty-five years - seek out the facts surrounding the most important issue of this or any other time.
The Citizen Hearing on Disclosure will be filmed as the basis for a forthcoming documentary- Truth Embargo - by Just Cause Entertainment.

For more information on the Citizen Hearing, visit: http://citizenhearing.org
Posted by Margie Kay at 1:38 PM No comments: Links to this post

Rancher/Owner: Mr. B., Deputy Sheriff
Witness: Mr. D.
Present: Margie Kay, Investigator, Mr .D., Mr. B., and later his son. Also present was Margie Kay's husband.
Note: some photos are from Mr. D., others are my own. 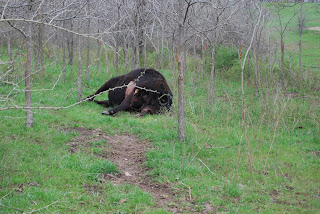 I was contacted via e-mail on April 16 by Mr. D, who I met at the Ozark UFO Conference on April 11 or 12, 2013. Mr. D send me several photos of a mutilated cow that his friend and neighbor, Mr. B owned. The cow was found on April 10, but Mr. B had not visited the pasture for three days prior so does not know when the mutilation occurred during this three-day period. I was traveling for conferences and was unable to get to the site until April 22.

Mr. D met my husband and I at the Rich Hill exit and took us to his ranch, where we then got into his four-wheel drive vehicle and traveled to the site of the mutilation through rough rock roads, through two streams, and extremely muddy areas. We arrived before dusk, and I took photographs, and soil samples inside the area where Mr. D remembered the cow was found, however, he was not 100% certain of the exact location and it had rained since, changing the area somewhat. I also took a control sample approximately 20 yards away. He did show me photos on his camera that he took right after the cow was found showing a read glow over the ground where the cow was located. He and his wife camped out one evening at the site and took a photo at 9:30 pm, which is when the red glow appeared. Daytime photos do not show the red glow.

Mr. D then took me to the site where the dead animal was moved and I took several photos of it, which show that nothing has touched it, but it is bloated up and decaying. Flies were swarming around it and due to the awful smell I could not get very close to it.

Mr. B said that his wife found the cow lying dead at 9:00 am on Wednesday, April 10 and moved it with heavy equipment to another location away from the pasture before reporting this to her husband. When she explained that two nipples and ½ of the udder, and female parts had been removed, Deputy B immediately went to the site of the dead animal and took photographs. He was very upset at losing his $1,500 animal, but did not report this to anyone else, remembering three cow mutilation investigations he did 20 years ago in the same area where three ranchers lost animals. At that time, he worked on two cow and one bull mutilations, each being owned by separate ranchers. The cows had udders missing, and the bull had its horns, tongue, and genitalia missing, and the head was skinned. At the time, Deputy B.

thought it was a cult that was doing the mutilations but was perplexed because there were no signs of human or vehicle tracks near the animals and no blood. The FBI told him at that time to quit pursuing the cases and drop his investigation, which he did, being somewhat alarmed at the tone of the FBI. The Sheriff also told him to drop it and not ask any further questions.

Mr. B then stated that he has been to his pasture site every night since April 10 in an attempt to see who or what might return, but that he has seen nothing out of the ordinary since. He and Mr. D. also said that the other cows have been acting strangely, and that they would not go near the mutilated cow, and that one day all of the calves were found at the pond crying out, while the rest of the heard remained up the hill ignoring them. This is not normal behavior for cattle, as they always all remain together and don't abandon their calves. Another day, Mr. D. found one single cow grazing on a hill, far away from the herd, which he found extremely strange as well. He related a case with his own cattle where one cow got separated from the heard and dropped dead from a heart attack due to fear of being away from the herd.

Both men also said that no coyotes or buzzards have touched the dead cow, which is also not normal. They would have expected animals to be feeding on the dead cow, but none have done so (see my own photos showing that nothing has touched the cow).

Deputy B said that there were no tracks from any type of vehicle, nor footprints on the ground near the site where the cow was found. It had been raining and the ground was wet and would have shown some type of tracks under those conditions. Mr. Boyles has investigative training and would have been able to ascertain whether a vehicle had been in his pasture.

There was no blood found around the dead animal, however Mrs. B. thought she saw drops of blood in the animal's nose.

Mr. D had recently read that sometimes the tongue is removed in cattle mutilation cases, so he opened up the cow's mouth with a stick and found that this cow's tongue has indeed been removed. He submitted a photo of this.

Mr. B and Mr. D said that they will send me all of their photos.

Investigator's notes: I believe that Mr. B and Mr. D are credible witnesses and are not fabricating this story. They wish to remain anonymous.

Posted by Margie Kay at 8:47 AM No comments: Links to this post