On June 19, 2011 the Swedish-based diving company Ocean X Team discovered something they’ve never quite seen before.  While exploring in the Baltic Sea between Finland and Sweden looking for a wreck sunk by a German submarine during World War I which may contain rare champagne and cognac a very unusual image appeared on the sonar.


In my June 28, 2012  interview with project manager Peter Lindberg of the Ocean X Team by phone, he told me that the object has a smooth surface resembling some type of metal or perhaps concrete.  It has angular edges, suggesting that it was purposely shaped in this fashion.  At first they thought it was just stone or a rock cliff, but after further observations the object appeared more as a huge mushroom, rising 3-4 meters (10-13 feet) from the seabed, and that it has rounded sides and rugged edges. The object has an egg shaped hole measuring approximately 10” in diameter, leading into it from the top,. On top of the object they also found strange stone circle formations which look like firepits. The stones were covered in something resembling soot. 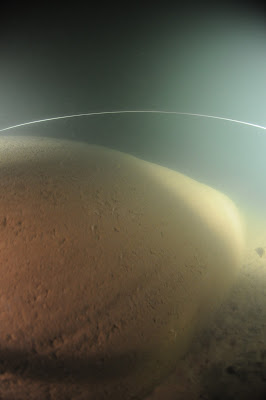 Lindberg said that the object measures 60 meters (197 feet) in diameter and is almost 80 meters (275 feet) under water.  Additionally, there is a 3,800 foot long path or scrape along the bottom of the sea leading up to the object. The path to the object itself can be described as a runway or a downhill path that is flattened at the seabed with the object at the end of it.  Sections of the object are at a 90 degree angle and look like passageways or walls.


At one point, the deep sea dive computer read that the temperature of the water was –1 degrees, which according to Lindberg is impossible.  The divers could not survive water at that temperature.


The main objective of this dive was to film the object, however, when a diver attempted to use his underwater video camera the light went out and it took several attempts to get the camera to come on. It finally came on and he filmed, but upon returning to the ship the team found that nothing was on the film.  Other researchers such as Richard Hoagland have stated that these events suggest that an electro-magnetic interference of some type may be coming from the object.

Because of the depth it is a risky operation that requires a lot of planning, strategy and financial resources, said Dennis Asberg, one of the three professionals at Ocean X Team I Stockholm, Sweden.  The dives only last approximately 15 minutes due to the depth and the visibility is poor. 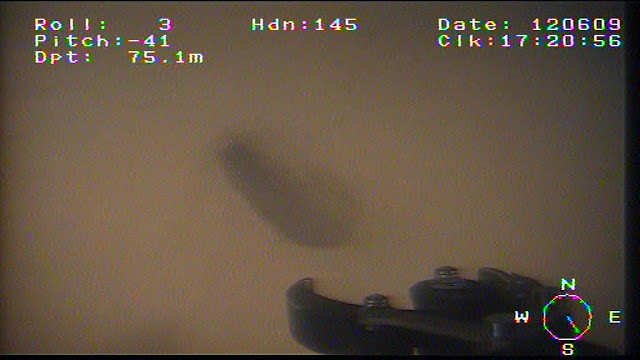 “During my 20-year diving career, including 6000 dives, I have never seen anything like this. Normally stones don’t burn. I can’t explain what we saw, and I went down there to answer questions, but I came up with even more questions “, says Stefan Hogeborn, one of the divers at Ocean X Team.
“First we thought this was only stone, but this is something else. And since no volcanic activity has ever been reported in the Baltic Sea the find becomes even stranger. As laymen we can only speculate how this is made by nature, but this is the strangest thing I have ever experienced as a professional diver“, continues Peter Lindberg, one of the founders of the Ocean X Team.  Peter believes that the object may pre-date the last ice age and may be an ancient structure.
Right now, scientists are examining samples from the circle-shaped object, and experts in sonar imaging are processing data from the ship to hopefully shed more light over the mysterious object.
Another expedition is planned in the next two weeks on the team’s new ship ANCYLUS. They hope that a geologist specialist will join them.